Your Chance To Participate

The Marysville City Council will conduct public hearings Monday on two touchy subjects – annexation and re-zoning. Here is your chance to be heard.

MARYSVILLE – Should any Marysville residents have strong opinions on whether or not 260 acres of property should be annexed into the city or if seven parcels on Marysville’s west side should be re-zoned for the sake of a housing development, those residents’ chance to make their arguments  – on the record and before the Marysville City Council – will be Monday at 7 p.m. in the Council Chambers at City Hall, 209 S. Main St, where the Council will be meeting in regular session and be holding public hearings on both the proposed annexation and re-zoning.

The first ordinance up for the public hearing will be to consider the annexation of approximately 263 acres in Paris Township into the city limits. The second ordinance calls for the approval of the Planning Commission’s recommendation to re-zone those seven parcels on west side of the city in Paris Township from U-1 (Township Zoning), to a Planned Unit Development (PUD) where Stillwater Farms plans to build 600+ housing units.

Individual citizens who wish to address either the annexation or the re-zoning ordinances before the Council will be given five minutes each to do so at Monday’s meeting, and the remarks will become part of the minutes.

There will be no ordinances up for a third reading and final vote Monday.

Up for a first reading Monday will be an ordinance to establish a community reinvestment area which will provide a tax-revenue sharing agreement between Marysville and the Marysville Exempted Village School District and the execution of a donation agreement between the City of Marysville, MEVSD, Ohio Hi-Point Career Center, the Community Improvement Corporation of Union County and Innovation 2. Also up for a first reading is an ordinance which will add a deadline for the submission of an application for wastewater billing credit.

The lone resolution on the docket, if passed, will allow the City Manager to sign a service contract for a utility services agreement between the City of Marysville, Union County and the Jerome Village Community Authority. 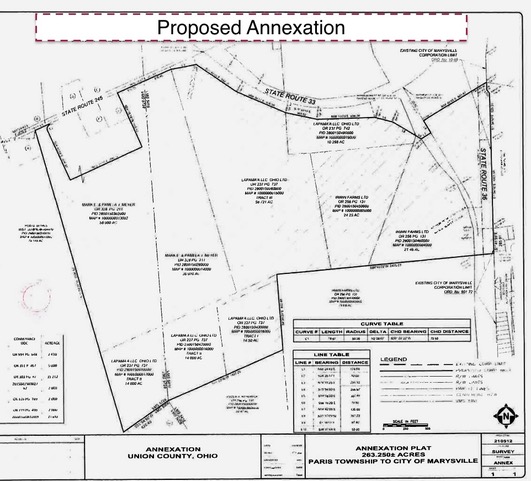