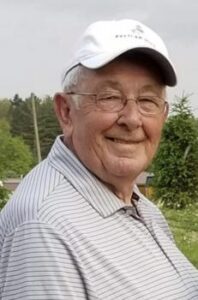 He was born May 31, 1938 in Sandy Hook, Kentucky to the late Lee and Mona (Kintzer) Nickels. He was also preceded in death by siblings, Jack and Herman Nickels, Evelyn Miller and Edna Mae Perkins.

Wilbur had worked for 29 years as a General Foreman at the former Tecumseh in Marion and then retired from International Paper in Delaware. He had attended the Church of Christ Christian Union in Marion. Wilbur was a talented golfer, he enjoyed playing at Kings Mill and it could be said that he made a little money on the side from his playing partners. He also enjoyed NASCAR, his favorite drivers were the Earnhardts. He was also a pretty good bowler in his younger days.

Wilbur could be described as a simple man, who enjoyed simple pleasures. He was a true family man! He was devoted to his loving wife and daughters and when they had families, he could not get enough of his grandkids and great grandkids. He was so proud of them all. Wilbur also passed the love of hunting along to his family.

The family cherished all the family vacations to their favorite spot, Daytona Beach, Florida.

Funeral services will be held Monday September 12, 2022 at 1:00 pm at the Church of Christ in Christian Union, Pastors Wes Craker and Larry Dillon will officiate. Burial will follow in the Marion Cemetery. Friends may call two hours prior to the service beginning at 11:00 am at the church.

The Stofcheck-Ballinger Funeral Home in Richwood is assisting the family.

Memorial gifts may be made to the Church of Christ in Christian Union, 1709 Bellefontaine Ave. Marion, Ohio 43302

Condolences and remembrances may be expressed at www.stofcheck-ballinger.com