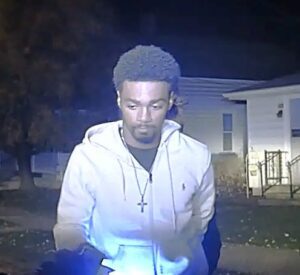 On October 28, 2022, at approximately 10:52 PM, an officer from the Marysville Police Division initiated a traffic stop on a vehicle in the 100 block of 2nd Street. The vehicle, a white Nissan Altima, quickly pulled into a residence in an attempt to avoid the officer. The Nissan was registered to Craivion Johnson of Columbus with two active warrants for his arrest. The driver quickly exited the vehicle and gave the officer a fictitious name. Through the course of the investigation, the officer learned the driver’s identity was Craivion Johnson (age 22) and confirmed the outstanding warrants. As the officer attempted to take Johnson into custody, he pulled away and tried to flee back to the vehicle. The officer was able to wrestle Johnson away from the vehicle, and a struggle ensued. Johnson was able to break free from the officer’s grasp and fled south bound between houses. The officer gave chase, but the suspect was able to elude the officer and responding units. During an inventory search of the vehicle a loaded 9mm handgun was found in the center console, along with a significant amount of marijuana (packaged for sale), drug equipment used for the trafficking of marijuana, and other items. A considerable amount of cash was also recovered. Additional resources from the Union County Sheriff’s Office were utilized to search for the suspect, but he was not found. In addition to the outstanding warrants, Johnson had a previous conviction for armed robbery, which would have prevented him from carrying a firearm legally. Charges, including resisting arrest, drug trafficking, possession of a firearm under disability, and others are pending against Johnson.