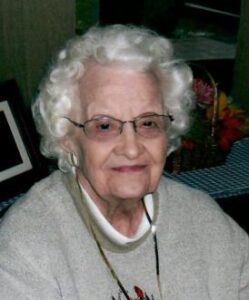 She was born April 5, 1925 in Lexington, Kentucky to the late John and Mattie Lou (Mynes) DeVore, she was also preceded in death by her husband Glen Edward Williams, they were married February 22, 1945 in Columbus and he died September 18, 1989. She was also predeceased by a son, Timothy Williams, a grandson Marcus Williams and two brothers and two sisters.

Sally was a dedicated homemaker, who made her family the center of her life. She would pray for each and every one of them on a daily basis. She cherished the family get-togethers and the time she could spend with them.

Sally was a long-time dedicated member of the Fulton Creek Friends Church, where she had taught Bible School.

She enjoyed doing pencil art, crossword puzzles and taking care of her flowers and yard, everything had to be just so!

She had helped many of her family with babysitting and was known for her delicious potato salad.

Funeral services will be held Friday July 8, 2022 at 11:00 am at the Fulton Creek Friends Church, Pastor Art Minnehan will officate. Burial will follow in the Radnor Cemetery; Friends may call Thursday from 5-7 pm at the church.

The Stofcheck-Ballinger Funeral Home in Richwood is assisting the family.

Condolences and remembrances may be expressed at www.stofcheck-ballinger.com