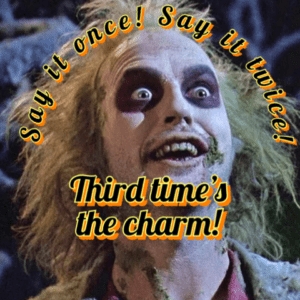 MARYSVILLE – A recently dead couple of ghosts (Alec Baldwin, Geena Davis) don’t much care for the very-alive oddball family that moved into their house following their untimely demise. They just want to haunt the place in peace. So the pair enlist the help of a “bio-exorcist” in the form of Beetlejuice (Michael Keaton) to rid the house of newcomers.

Little did they know that Beetlejuice does not work and play well with others and hijinks of a very creepy sort bust out once Beetlejuice gets the green light. Directed by Tim Burton, Beetlejuice was a hit at the time of its first theatrical release in 1988 and remains so to this day.

The Avalon Theatre, 121 S. Main St., is bringing the macabre and hilarious blockbuster Beetlejuice to the big screen as it will be having one showing of the American classic Saturday at 7 p.m.

Tickets are $8 apiece on a first-come, first-served basis (link below). Walkups are welcome Saturday and they will get you in if there are seats available, but don’t count on that being the case.

Click here to buy tickets online. Say it once. Say it twice. Third time’s the charm!